“King George the Third,” said he, “laid out a road four rods wide and straight the whole length of the Cape”; but where it was now he could not tell. — Henry David Thoreau, Cape Cod

When I teach public history I tell students look for traces of the past the landscape. This might be a building that seems out of place, a random inscription, a park or empty lot, a name applied to a building or street. A monument.

Of course all these things can be lies or ideological interference (The Washington Post has recently published a great article about a recent study that points to the ideological agenda of monuments in the US, and Dolores Hayden’s landmark 1995 book, The Power of Place goes into even greater detail). But by seeing what’s present you can also begin considering what’s absent.

I have a preoccupation with Cape Cod roads. My house (built circa 1820) has always been on a road, but the stretch in front of it has been incorporated into US 6. The road it was previously on bears west and meanders into Truro Center. US 6  is more of a straight line to Provincetown. Both of these roads are ultimately modern, paved roads, bearing no resemblance to the road used when my house was built.

While some roads, like my road, are integrated into the modern streetscape. Others are not. Over the past week I’ve been walking old roads and, in basically the middle of nowhere, I’ve found two markers memorializing schools. The first commemorates the Island School on Bound Brook Island (1844) and the second commemorates Wellfleet’s first school on the Old King’s Highway (1798). These markers tell us that our ‘nowhere’ was once someone’s ‘somewhere.’

Many of the main roads (and some of the highways) in New England are built upon indigenous roads (although rarely marked as such). This makes it very likely that roads will be the oldest part of the built landscape one ever encounters in New England. In writing about Bound Brook Island, I’ve noted the shifts in land use as technology and environment changed. The King’s Highway (mentioned in the quotation at the top of the page), was a main artery through the Cape — with the sections from Sandwich to Orleans now used as US 6A and the sections north of that both integrated into the modern roads and existing as dirt roads through the National Seashore.

My walk on the Old King’s Highway was the first leg of my search for a trace of Henry Thoreau. His essay, ‘The Wellfleet Oysterman,’ was first published in The Atlantic in October 1864. It was part of the posthumous project of completing his book, Cape Cod. His first of several walking trip to Cape Cod was in 1949, and by 1852 he had started to organize his notes into essays.

We’re taught to think about Thoreau’s walk on Cape Cod as both singular and confined to the backside beach. In part this is because the book compresses his observations from several trips into a linear narrative. I also think the idea of walking from Orleans to Provincetown on the beach is an irresistibly romantic notion. But Thoreau didn’t limit himself to the beach, and at the beginning of The Wellfleet Oysterman, he writes:

Having walked about eight miles since we struck the beach, and passed the boundary between Wellfleet and Truro, a stone post in the sand, — for even this sand comes under the jurisdiction of one town or another, — we turned inland over barren hills and valleys, whither the sea, for some reason, did not follow us, and, tracing up a hollow, discovered two or three sober-looking houses within half a mile, uncommonly near the eastern coast.

Where he traced up the hollow, is now Way 1 or Thoreau Way. One of the sober looking houses belonged to John Y. Newcomb, the Wellfleet Oysterman. Today the house is privately owned and it’s difficult to get a glimpse of it without trespassing. The best photo I could capture required navigating a wooded thicket to the edge of Williams Pond (Swett Pond in Thoreau’s time). The most common photograph of it is from 1933 and used in its listing on the National Register of Historic Places. 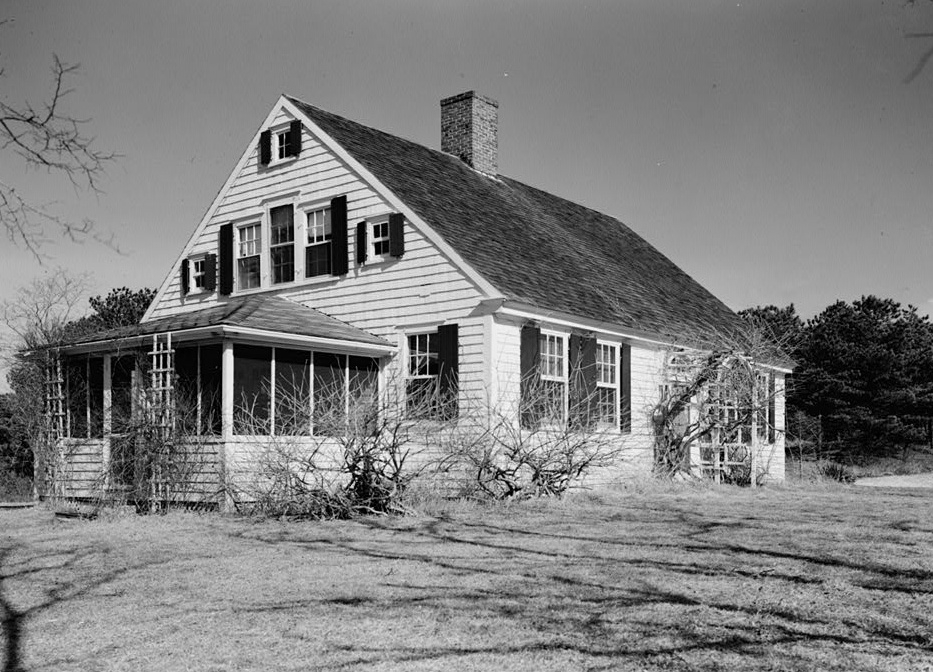 The land around this house is no longer barren, and it’s an illusion to think I’m walking on the road traveled by Thoreau. It’s a fundamentally different ecosystem now. No longer the agrarian landscape of Thoreau’s time, it hasn’t reverted to the landscape indigenous people knew. Thoreau’s beach is gone, too. The dunes and cliffs he wrote about are long-claimed by the tides. We’re 650 feet inland from the edge he encountered. This place is not what it ever was. It’s a new thing, and worth considering and valuing on its own terms.

I went looking for a trace of Thoreau because, in a 19th century sense, just five or so miles down the road, the Newcomb family were neighbors to whomever lived in my house in the 1850s. The way of life Thoreau documents wouldn’t be dissimilar from what happened in my keeping room, buttery or parlor. While I may huddle around a laptop streaming videos in from of my fireplace, it’s not impossible that some old man once sat there recounting the sound of cannon at Bunker Hill amplified over the Bay.

Notes on the ecosystem: Williams Pond is part of a cluster of partially interconnected ponds at the headwaters of the Herring River. The Herring River cuts across Wellfleet and empties into The Gut at Great Island. 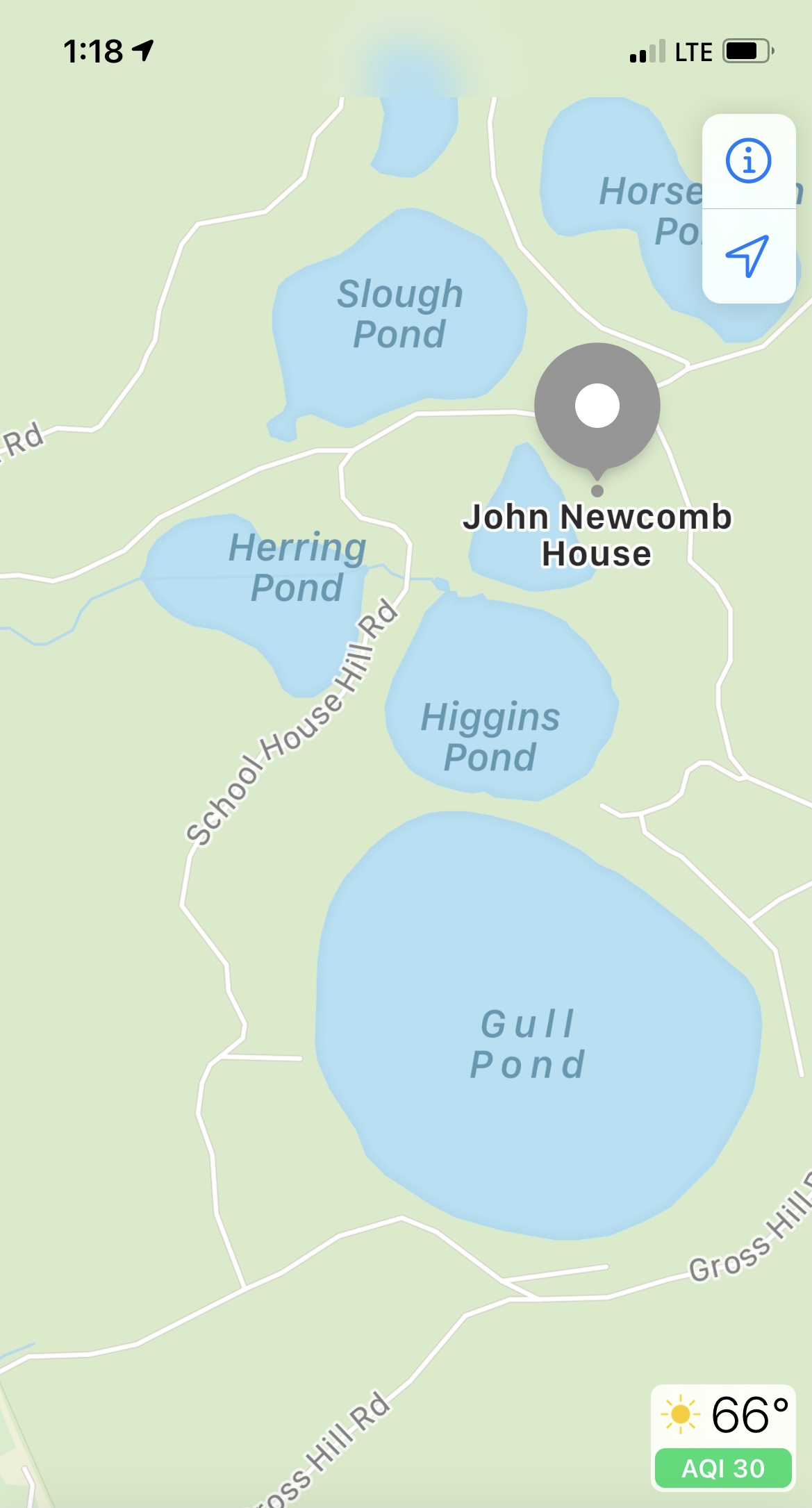