People like pictures. They won’t go away. Everybody thought the cinema would kill the theatre, but the theatre will always be there because it’s live. Drawing and painting will carry on, like singing and dancing, because people need them. I’m quite convinced that painting will be big in the future. If the history of art and the history of pictures diverge, the power will be with the image. Nobody’s taking much notice of the avant-garde anymore. They’re finding they’ve lost their authority.

I like looking at the world. I’ve always been interested in how we see, and what we see. The world is exciting, even if a lot of pictures are not. And right now is an exciting moment in the history of pictures. Does art progress? Not many really think it does, do they? But why does art have to go anywhere? Art hasn’t ended, and neither has the history of pictures. People get the idea from time to time that everything is finishing. It doesn’t end at all: it just goes on and on and on.  — David Hockney, A History of Pictures (p. 341)

David Hockneyhas committed his life to making pictures. Primarily known as a painters, he’s developed significant bodies of work in photography, as a draftsman, with iPad drawing/painting, in video, and as a stage designer for opera. He’s written about the use of camera obscura in Renaissance art. And his work over the past decade has continued 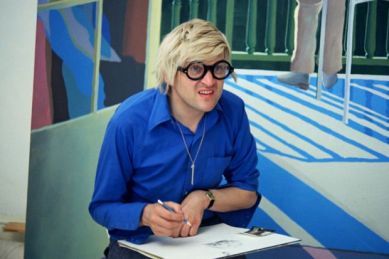 his long fascination with human spatial perception, as rendered on a two-dimensional surface.

Famous for his portraits and iconic depictions of life in Los Angeles, his later bodies of work have returned him to his Yorkshire roots – with significant installations of landscape painting at the Royal Academy. While building upon a lifetime of study and practice, his landscape works refer to the landscape tradition in British painting. The recent exhibition Hockney / Van Goghalso points to his search to animate and find excitement within the landscape tradition.

Using multiple canvases to create monumental paintings, Hockney works to create space that reflects human perception of space – rather than holding closely to rules of Renaissance perspective or the theories of Modernist space (Hofmann, et al). He’s been known to speak of those systems as the ‘tyranny of realism,’ and has worked to create alternatives to single point perspective. Advancing these ideas about space, he’s also experimented with multiple video streams to create installations that attempt to reflect the experience of being in space.

I’ve never been against new things just because they are new. I try them out and see whether they are good tools for me. The fax machine was, the iPad is. But how it’s done is not the deepest mystery. Because, in the end, no one knows how powerful and memorable pictures are made. Understanding a tool doesn’t explain the magic of creation. Nothing can.— David Hockney, A History of Pictures (p. 106)

From the Tate: David Hockney, (born 9 July 1937) is a British painter, draftsman, printmaker, stage designer, and photographer. As an important contributor to the pop art movement of the 1960s, he is considered one of the most influential British artists of the 20th century.

From Wikipedia: David Hockney(born 9 July 1937) is a British painter, draftsman, printmaker, stage designer, and photographer. As an important contributor to the pop artmovement of the 1960s, he is considered one of the most influential British artists of the 20th century.[2][3]