“Very often if you go to the locale where an artist works, you’ll suddenly really know that you’re in the person’s area.” – Richard Diebenkorn

Richard Diebenkorn has been an influence on my work since art school. For me, he’s an entry point into a lineage in Western art that leads back to Cezanne, by way of Matisse. Diebenkorn advanced the visual conversation established by those artists, and offers us several pathways into the tradition – specifically through several abstract periods and a period of working representationally. Importantly, the motif in Diebenkorn’s artworks is 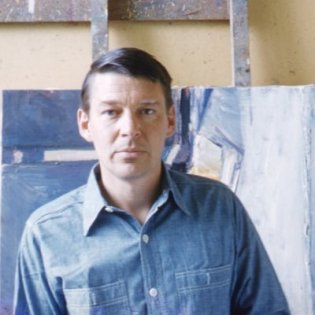 secondary to the visual conversation in which he’s engaged. The recent Matisse / Diebenkorn exhibitionprovides exciting insight into these dimensions of his work.

Regardless of whether Diebenkorn is using abstraction, the human figure, still life, or landscape, it is the construction and visual structure of his compositions that excite his picture plane. One way to explore this is to look for pathways through the picture – by following lines, shapes and juxtaposition of color fields in his painting. Using these elements, he creates pathways for the eye to move over and around the picture, keeping his viewers looking at the painting as their eyes instinctively follow the passages. Here are several examples:

Diebenkorn was also a process painter. He didn’t write or talk about his process extensively, but he did leave us some delightfully vague studio notes– written to himself and tacked to his studio wall. He was also known to spend a lot of time looking at his works in progress before making strategic interventions. I learned recently, in a workshop on Diebenkorn I took at Seattle Artist League, that he would use a system of working for twenty minutes and stepping back for two minute, gradually shifting the working and looking time until he was working strategically for two minutes and looking for twenty.

In one interview he said every painting starts with a feeling. At another time he elaborated on this, with an emphasis on both process and result:

“All paintings start out of a mood, out of a relationship with things or people, out of a complete visual impression. To call this expression abstract seems to me often to confuse the issue. Abstract means literally to draw from or separate. In this sense every artist is abstract . . . a realistic or non-objective approach makes no difference. The result is what counts.”— Richard Diebenkorn

From Wikipedia: Richard Diebenkorn (April 22, 1922 – March 30, 1993) was an American painter and printmaker. His early work is associated with abstract expressionism and the Bay Area Figurative Movement of the 1950s and 1960s. In the late 1960s he began his extensive series of geometric, lyrical abstract paintings. Known as the Ocean Park paintings, these paintings were instrumental to his achievement of worldwide acclaim.

From Richard Diebenkorn Foundation: Richard Clifford Diebenkorn Jr.was born in April 1922 in Portland, Oregon. When he was two years old his father, who was a hotel supply sales executive, relocated the family to San Francisco. Diebenkorn attended Lowell High School from 1937–40, and entered Stanford University in 1940. There he concentrated in studio art and art history, studying under Victor Arnautoff and Daniel Mendelowitz. The latter encouraged his interest in such American artists as Arthur Dove, Charles Sheeler and Edward Hopper. Mendelowitz also took his promising student to visit the home of Sarah Stein, sister-in-law of Gertrude Stein, where he saw works by Paul Cézanne, Pablo Picasso and Henri Matisse; this early exposure to European modernism opened doors that continued to beckon in the future. In June 1943 Diebenkorn married fellow Stanford student Phyllis Gilman; they would have two children, Gretchen (born 1945) and Christopher (born 1947).